About our Store Clock 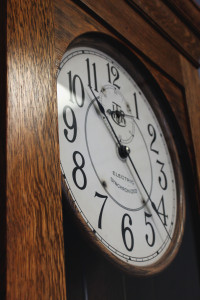 When you walk into our showroom, the centerpiece is an International Time Recording master clock. ITR later became IBM.  This clock was built in 1918 at the ITR factory in Endicott, NY. It was the master clock in the Boston Rubber Shoe factory in Malden, MA.  Once per minute, this clock sent an electric pulse to a network of “slave clocks” throughout the factory.  The slave clocks received that pulse from the master clock, and all clocks in the factory would advance simultaneously, in one minute intervals and were all perfectly synchronized.

This particular clock was saved from a wrecking ball back in the early 1970′s.  Shortly before the scheduled demolition, Jack Kurdzionak was visiting his mother. She worked in the office of the administrator who was managing the transfer of the property to the Malden Redevelopment Authority for demolition. The clock case was painted lime green to match the wall. It had not worked for years and there was an old Telechron electric clock hanging on the door covering the ITR clock face. Jack asked if he could take the clock before demolition. His mother obtained the necessary permission and he was able to remove the entire clock thus saving it for preservation.

At that time there was still one maintenance man working in the building. His name was Herbert Rockhill and he began employment there in 1919, just after returning from his WW1 service. He helped Jack remove the clock and mentioned to Jack that he had originally installed the clock in 1919. How fitting that the original installer helped remove the same clock over fifty years later.

It was meticulously restored by Jack and has been a fixture in The Watchmaker since we opened our current location in 1995. If you look on the top of clock you can still see the early 20th century wiring that was used to send the electric pulse, as well as a couple of spots of lime green paint.